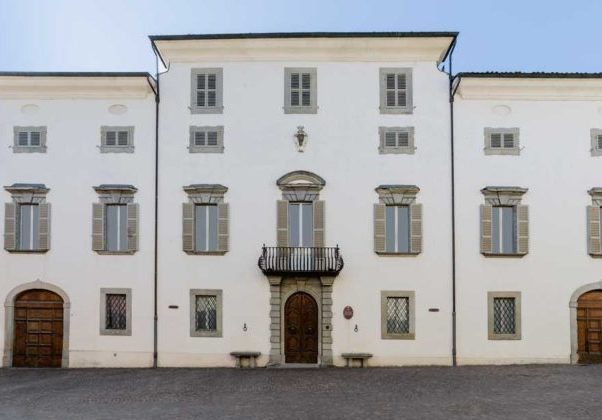 Palazzo Fantini is situated in the heart of Tredozio, a village on the border between Romagna and Tuscany. Its tranquil setting is far away from the chaos of modern life, surrounded by woods and winding roads.
The building is both elegant and austere, ornate and unpretentious, thus reflecting its dual origins, as the centre of a busy farm and the main residence of a wealthy family. Palazzo Fantini has been inhabited by members of a single family for almost three centuries.
The Fantini family records show that the foundations and cornerstone of the façade received a blessing on 3 May 1753, when building work began. The façade was built in the Tuscan Baroque style, and includes a balcony as well as the symbol of the family coat of arms, a cockerel. Several older buildings were joined to the façade, using the same architectural style, in order to give the entire building a more noble appearance.
Lorenzo Maria Fantini (1721 – 1782) was responsible for the construction of the façade and the restoration of Palazzo Fantini, together with builders from Milan. He had a law degree from the University of Bologna and initiated the building work together with his brothers, Pier Maria, also a lawyer, and Francesco Maria, who was a priest. Pope Clement XIII gave them permission to build private chapels dedicated to the Immaculate Conception, both in the Parish Church and in Palazzo Fantini itself.
In addition to the older and 18th century parts of the building, which contain rooms where important guests were once received, there are also charming later additions in Neo-Gothic or Liberty style, such as the winter garden.
Palazzo Fantini is surrounded by numerous farm buildings, although they are no longer used for agricultural activity. These buildings have been faithfully restored, and are used to house farm machines and equipment, as well as for cultural, musical and other types of events.

The Garden
Then comes the surprise of an Italian garden raising above the floor of the house and accessible only by a long staircase along a large wall of support. It consists of various sectors lying on the slopes of the hill. Designed in the 19th century, it recalls the classic themes of the period: the secret alleys, the fountain with water lilies, the precise geometries of the hedges, the topiary boxwoods, the antique rose beds, dahlias begonias and iris.
Higher up there is the park of secular trees such as cedars of Lebanon, holm oaks, horse chestnuts acacias, limes, oaks and underlying meadows with wild flowers, such as daisies, violets, primroses and cyclamens. This part mysteriously gets lost in the rock garden with staircases and walls of the romantic nineteenth-century style.
Morevoer, more recently a Aromatic Herbs area of the garden has been designed and implemented.
The dark green of the boxwood faces the red and yellow painted stripes of the inner wall. In fact, in the local tradition the agricultural buildings were painted with this typical two-colored stripes pattern.
The garden is part of the Grandi Giardini Italiani association. 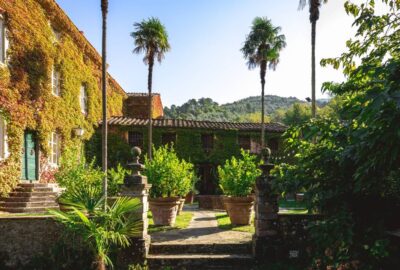 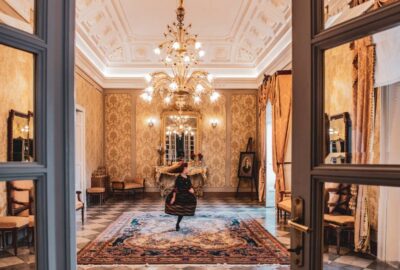 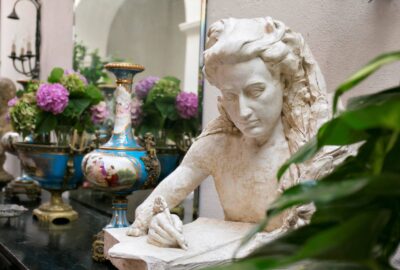