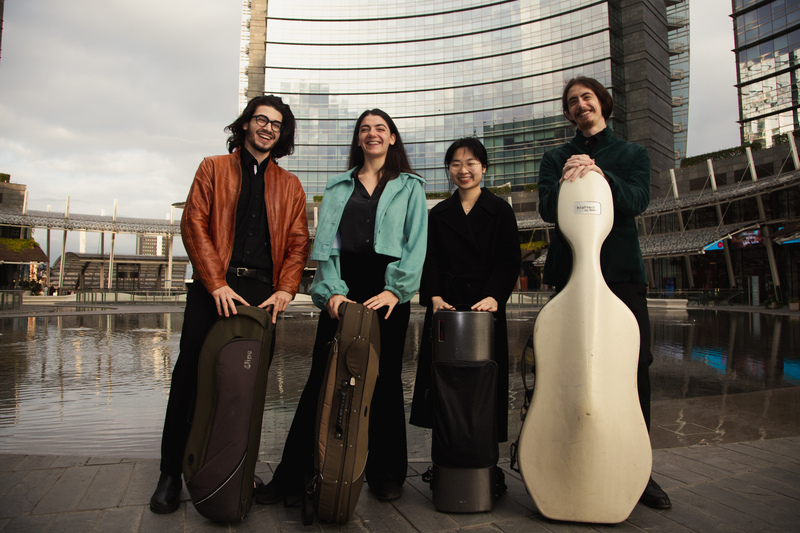 Quartetto Goldberg was founded in 2021 during the second pandemic wave as a study group at a time when concerts and opportunities for growth as musicians were rare. The name is meant to be a tribute to J. S. Bach’s Variations, a piece that binds the four members deeply and expresses their ideals of music-making: refinement, simplicity and communicativeness. In October 2021, the quartet is admitted to the Stauffer Center for Strings, where it regularly attends the Artist Diploma course in the class of Quartetto di Cremona and has the opportunity to attend master classes and lectures by international musicians such as Kyril Zlotnikov (Jerusalem Quartet), Sarah McElravy (Linden Quartet), Mark Messenger (Royal College of Music), Viktoria Mullova and Matthew Barley (Improvisation workshop) and Heime Muller (Artemis Quartet).

In December 2021, the ensemble has been selected to take part of the network of Le Dimore del Quartetto, for which it played at the inaugural press conference of The String Circle project at the Auditorium Arvedi in Cremona and through which the quartet took part in the Comitato AMUR’s “Musica con Vista 2022” festival, in concerts organized by artistic societies such as Filarmonica Laudamo, Musica Insieme Bologna and La Società dei Concerti in Milan.

The Goldberg Quartet was chosen as the “Resident Artist” of the La Società dei Concerti Foundation of Milan for the 2022/2023 season and is also the winner of the “Young Talents of the Stauffer Academy” scholarship sponsored by the Rotary Club of Cremona. The quartet was selected by Quatuor Zaïde for the International String Quartet Academy in Paris in July 2022, having the opportunity to meet internationally renowned musicians including Gilles Apap, Johannes Meissl, Jovan Markovitch and Quatuor Zaïde. The group will also participate in the Zeist Music Days Festival 2022, organized by Alexander Pavlovsky (first violinist of the Jerusalem Quartet) will have to receive lessons from Cuarteto Quiroga, Quatuor Ebène, Pavel Haas quartet, Cremona Quartet, and in the future Nuite de Quatuor 2022, which will take place in Paris at the Orangerie of the Musée d’Orsay, playing L. Van Beethoven’s Quartet No. 11 Op. 95 known as “Serioso.”

Jingzhi embraces Art in its entirety. As she draws and paints, she is inspired by the notes of F. Schubert’s String Quintet in C major for two cellos, her musical dream.

Giacomo grew up in a small village near the Monferrato, where the air smells of hay and jasmine and the memory of the futurist painter Carlo Carrà is alive. Fascinated by the lives of classical composers, he tells the story of music through articles and drawings for the weekly newspaper La Voce Alessandrina while listening to the notes of the quartets of Haydn.

Matilde transmits with joy and happiness her passion for music. She is a teacher at the Ricordi Music School in Milan, where she tries to instill in adults and children the sensitivity to listening. She lives high-speed emotions, which travel to the rhythm of the fourth tempo of the Sonata for viola solo op. 25 No. 1 by Paul Hindemith.

Martino is dedicated to Knowledge in its entirety. His intellectual curiosity leads him to investigate music on a daily basis by reading biographies and treatises. Every moment is good to let himself go to the listening and execution of J. S. Bach, getting lost among the counterpoints of the Goldberg Variations and the dances of the six Suites for solo cello.