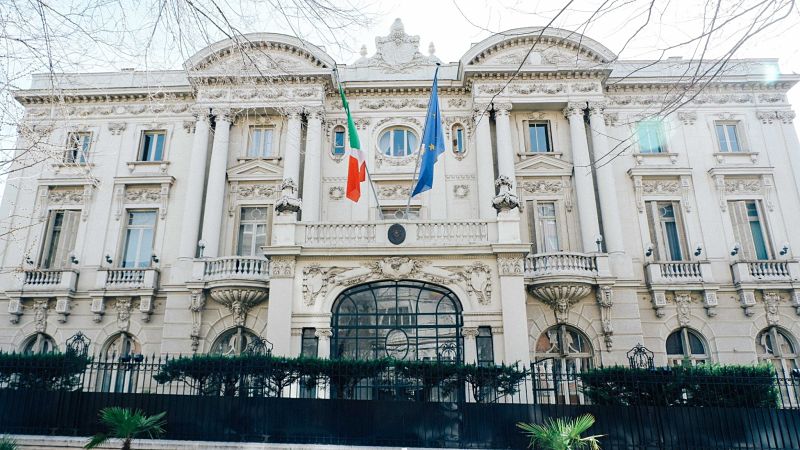 The Italian Embassy in Madrid is located in calle Lagasca, a neighborhood developed starting from the early twentieth century. The building and the garden occupy an entire block between the callas Lagasca, Juan Bravo, Velázquez and Padilla, in the center of Ensanche: the typical network of roads that characterizes the urban growth of the Spanish city at the beginning of the last century.
The building once belonged to the Marquess of Amboage, a man of immense fortune who wore a noble title granted to him by the Vatican.
The building was designed by Joaquín Rojí, one of the best Spanish architects of the early XX century. Its conception is inspired to French Baroque, so as to make it appear as a residence of much older era than its actual construction.
It is a three-storey building overlooking a vast garden of 680 square meters, also owned by the Italian State. The area also includes a smaller service building.
The Diplomatic Chancellery is located on the top floor of the Embassy, while the other floors are used as representation rooms and private residence of the Head of Mission.
In the representation halls there are many works of art (paintings and sculptures) owned by the Ministry of Foreign Affairs or temporarily given from various National Galleries and Italian Collections such as: La Galleria Nazionale di Roma, il Museo Nazionale di Roma, il Museo di Napoli, la Galleria di Capodimonte e la Galleria di Firenze
Among the works there are many examples of Italian pictorial art of the seventeenth century (especially the Neapolitan and Parma schools) among which stand out the names of famous masters such as Salvator Rosa, Cavalier D’Arpino, Pier Francesco Mola and Federico Buzzi. There are also works by foreign masters, in particular of Flemish painting of the seventeenth and eighteenth centuries. Worth mentioning, for its great beauty, is also the sculpture of the renowned Spanish artist Mariano Benlliure representing the famous dancer Pastora Imperio.